Looking Back to Look Forward: 10 Years of Matter Of Form

As we celebrate Matter Of Form’s 10th birthday, it seems fitting to look back on a decade of this agency

Honouring its humble (yet forthright) beginnings in Soho (read: building site), journeying all the way through to its current iteration as a world-class agency, with four separate brands, serving clients across the globe. As we kickstart the roaring twenties (2.0) by opening an office in New York, we rather think a Gatsby-esque celebration is in order...

Matter Of Form: Phase One

Starting Matter Of Form at an illustrious address on Soho Square, (corporate neighbours including Sir Paul McCartney’s music publishing business), one might have thought, upon first glance, Anant had bitten off more than he could chew.

And one would be absolutely correct.

Fortunately, due to his status as resident DJ in celebrity haunt Chinawhites, which he insists was hugely off-brand, there was enough cash flow for him to secure an office space with a glitzy postcode at the beating heart of London’s creative industries.

But despite delusions of grandeur, said ‘office’ was, in fact, a dusty danger-zone: essentially a live building site with one room on the top floor. Lunches were taken en masse at everyone’s favourite middle-class chain restaurant, Pizza Express, in order to access running water.

After working with accessories brand Radley, Anant noticed that the B2B sales process in fashion was broken, and launched a business called ReChannel. The aim was to simplify fashion wholesale by connecting brands directly with their retailers on a digital platform that removed the hassle of paper, excel and email orders.

In lean startup mode, Anant put together an A-grade team of Oxbridge types, fashionistas and engineers, and headed off to Milan tradeshows to drum up business. Ultimately, despite Orlebar Brown as a headline client, and a thriving team of 20, Rechannel failed to raise enough capital to weather the length of the B2B sales process, and it closed its doors two years later. [Insert hackneyed quote about ‘failing being fine’ here].

Happily, a small side project, Worldfixer, grew to become the world’s largest platform for media fixers and became the jewel in the crown of the various businesses the team had got involved in.

A chance encounter at Glastonbury a couple of years in, indirectly set off a chain of events that would ultimately lead to the prevention of the business dissolving in a blaze of hedonistic glory. 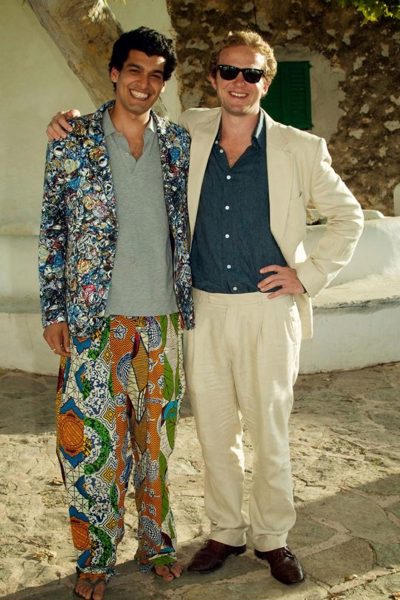 Fred Moore, now-COO of Matter Of Form, had the misfortune of sharing a tent with then-stranger Anant at Glastonbury in [2010]. Despite what must have been a deeply traumatising and harrowing experience, Fred, for reasons only known to himself, was powerless to resist the charismatic charms of Anant, and, two years later, left a well-paid job and financial security to join the company.

Fred introduced several new concepts to the business, including invoicing clients and time-tracking, both of which, to this day, Anant believes are a bit crass. But it was the start of a beautiful, if unlikely, new love story.

Those first few years revealed a number of somewhat glaring errors in the business model, seeing it stuck in a seemingly-endless circle of re-investments and profit flatlining. Of which the less said the better.

A few lessons were learned in MOF’s infancy:

By the end of those heady, early days, Fred and Anant operated the business in the spirit of a Jeff Bezos and Mark Zuckerberg pub tribute act. They would read roughly two to three business plans a week, and became utterly seduced by fully-grown adults wanting to build businesses that ranged from the bland to the entirely bizarre – systematically annihilating the balance sheet in the process.

After finally coming to the conclusion it was probably best to work on revenue-generating projects, the team, with a new-found sense of professionalism and purpose, began a new life as tech entrepreneurs-turned retail specialists.

This did not come without its own set of problems. Working in eCommerce means that you are responsible for the commercial life-force of your clients, 24/7. Clients were demanding, and (mostly) didn’t understand digital. It was an era of very little sleep, and a lot of ‘move fast and break stuff’.

Fun fact: For most of the early days, Tech City in Old Street was lacking in one key ingredient for a successful digital business: reliable internet. On investing in a new office, Matter Of Form was initially run tethered from Anant and Fred’s iPhones. Any other Shoreditch business owner pre-2010 will sympathise...

The team still had a passion for product design: various ventures saw them build apps and platforms that sought to transform everything from recruitment, to academia, to cosmetic surgery, and a thirst for innovation ran through the veins of the whole company.

The management and cultural challenges of this period shaped the way the business is run now. Suddenly, things became a touch enterprise. Matter Of Form became less ‘tech startup’ and more ‘serious business’. (Well, sort of.)

With that, came a new strategic direction, with bolder responses to client briefs. Eventually, an equilibrium was found, leading to the company value, ‘humble yet forthright’, to supplement (vital) bold thinking with pragmatism.

The power of values cannot be underestimated in bringing a group of disparate individuals into one cohesive whole. This spiritual theme remains a visible force in the culture of the company today, and is embodied by life coaching, meditation retreats, and other wellness initiatives that all work together to create an unspoken value system.

That, and the pub directly under the office.

The adolescent phase of the company was tricky, involving a lot of soul-searching, tough decisions on what the company, and its people, stood for.

A few lessons were learned in this phase:

The last four years of Matter Of Form has seen its graduation into a globally recognised business: a fully-fledged agency which has a talented, dedicated, passionate workforce that solves business problems for, really, rather massive clients.

The proposition is divided into four distinct segments: Matter Of Form, Form Commerce, Diffusion Digital and Experience Haus, with an exceptional senior team across the board spanning strategic consulting, design, user experience, technology, search and content.

The business has reached a point of inflexion: the most important thing now is to continue to attract the sharpest minds in business, design and technology – hence the acquisition of Experience Haus, the training business.

MOF Group has clients in nine countries: being procured from Thailand, Hong Kong, Monaco and the US is the ultimate flattery as a service business.

There is a real bond and a momentum in the community of Matter Of Form, as illustrated by the enduring friendships, relationships and ridiculous adventures that unfold day-by-day among the team.

The lessons learned in recent years:

Here’s to the next ten years.

About Matter Of Form Group

Established in 2018, the Matter Of Form Group is a collection of four award-winning agencies united and bound together by a common set of ideas and values centred around the mantra ‘Make Change Effective’.

If you’d like to discuss how the Matter Of Form Group partner to provide strategic design and tech services, please get in touch via hello@matterofform.com to arrange a time to speak with our team of consultants or visit www.matterofform.com.For Press and Media enquiries, please contact Emma Blackmore, Group Marketing Director: emma@matterofform.com.