A Conversation with The Economist's Denise Law

More than just a newspaper, The Economist Group is a media company that challenges readers to critically examine the fundamental issues facing our planet.

From its inception in 1843, The Economist continues to provide bold ideas, a global perspective and rigorous analysis of world affairs. A beautifully curated library of text and audio content featured in weekly publications informs an engaged, global audience. According to the group’s most recent Worldwide Brand Report, average print and digital circulation per issue hits 1.4million.

We were honoured to sit down with Denise Law, Head of Product at The Economist to discuss how the publication confronts the digital revolution, the intrinsic importance of long-form content and what's surprised her most throughout her fascinating career in an age of tumultuous political, social and technological change. Law began her career as a foreign correspondent at The Financial Times before establishing and managing the editorial social media department at The Economist. She now sits as Head Of Product at the newspaper and is among the primary drivers of the group vision.

"I’ve always been interested in building things", she says. "How to build sustainable business models within these legacy media companies and how to get them to talk digital to survive in the digital age." As someone who embraces digital innovation and shares our Matter Of Form mantra ‘make change effective’, we welcomed the opportunity to speak with Law for our second segment of ‘A Conversation With…’.

The Path To Digital

The Economist has undergone obvious transformation over the last 5 years. After 175 years of publishing, it is only relatively recently that the need for a cohesive customer experience (online and offline) to attract and retain subscribers has been pushed to the forefront by stakeholders and execs, with Law as one of the dominant driving forces behind such change.

Law joined The Economist three years ago working with wildly intelligent journalists who were not the first to embrace the importance of social media, user experience and modern product management best practice. Her first challenge was promoting a user-centric digital experience within a traditional print culture that had simply never been exposed to such areas of expertise.

"I could have gone in and said  'oh everybody should tweet, everybody should do digital and thrown jargon in everyone's directions. But that wouldn't have gone down very well. Instead, it was a two-year long campaign of showing rather than telling."

Whilst sceptics were naturally right to be cautious - especially given controversy surrounding social media today - social media remains an undeniably important and relevant way to get journalism in the hands of more readers. The success with which The Economist embraces social media, together with the paper's slick app, offers the perfect example of how best practice was brought into an organisation without compromising its values, a personal reflection of Law's endeavours at the newspaper.

"That to me has actually been the main sort of thing I've been focusing on throughout my career - how do you bring ‘newness’ into an old company and still maintain editorial integrity. This is a constant challenge because you could really get it wrong, make huge mistakes and upset people."

Despite the presence of often grossly oversimplified bitesize news featured in the digital and print space, the consistent popularity of The Economist’s long reads imbued with thought-provoking analysis and human curation remains truer than ever.

"Our customer research has shown no indication that briefings, for example, which are thousands of words long are less read than say the Espresso chunks which are just a paragraph long and are generally quick analyses on global affairs. If that piece of content is really good people will read it: it’s more about how you present that piece of content within the confines of the app."

Further customer research revealed the love and appreciation for the app’s Daily Picks - a selection of articles chosen by editors. Here lies another case in point of internal debate over digital; Law (and others across the business) had a hypothesis: that Economist readers may want algorithmically-driven content curation. However, customer research revealed that readers actually wanted its filtered analysis.

"What we found is that people come to The Economist because they trust our view of the world and our editorial judgment." Having said that, Law understands the potential benefits and importance of further exploration; "We don’t want to write off machine-learning completely. We are still curious to find out what would happen if we could present a view that was tailored for customers. Machine learning could help surface archival content or topics of interest for individual customers as an alternative to the human curated version."

Law highlights the importance of experimentation, testing prototypes with subscribers and not second-guessing what they want in order to deliver worthwhile digital products that prioritise the customer needs. 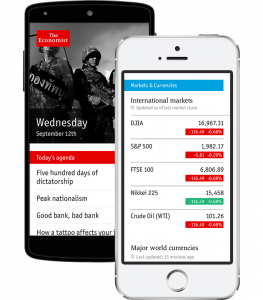 The cost of journalism?

Law cites the longevity of The Economist's paywall as one of the crucial ways the newspaper seeks to avoid "just jumping on a bunch of bandwagons". It allows niche, attentive analysis for an engaged audience.

She explains how many of the free digital news outlets who gained traffic from social media are now hurting, especially where Facebook has limited its news-posting following the catastrophic Cambridge Analytica scandal. Certainly, it's been hard for startup publications who rely on social media traffic, but according to Law, high-quality content requires obvious hard work and therefore should be paid for - something she has stood by since university.

With The Economist’s level of journalistic consideration, a paywall is a necessary prerequisite to the calibre of news it promises. 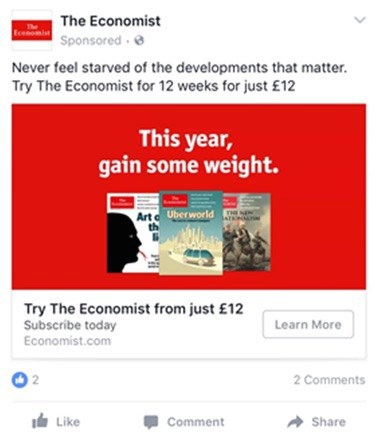 State of The World

As a journalist immersed in global news, Law is at the very heart of critical analysis of events revolutionising politics, society and technology. We couldn't finish the interview without asking her opinion on the state of the world. Law instantly recalled a conversation with her husband and their dreamy hopes for their newborn baby to one day help combat  climate change, "because I think that that is single-handedly the biggest threat to her generation."

"I don't think flying to Mars is the answer. Even in spite of Brexit and of what's happening in America, for me, climate change is the scariest thing of all. "

No doubt, The Economist will continue to deliver exceptionally curated and trusted opinion on the tumultuous events of the world across print and digital with Law at the forefront of innovation. Law’s goals as Head Of Product include improving the website, a slicker subscription process and to champion working together as a group to map out the best user-centric experience possible. Through its willingness to innovate and truly understand its subscribers wants and needs, it will continue to be a category-leading publication. We are excited to see what the future holds for The Economist.